Lee won at -13, four strokes ahead of runner-up Mina Harigae, at an American Golf Association major in North Carolina. Check it out right here with Betting News in 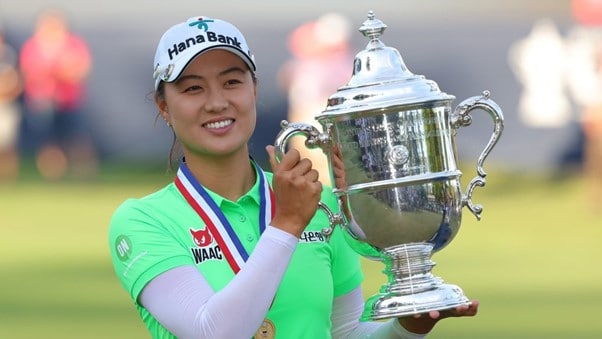 The tournament is held on the Pine Needles golf complex’s par-71 course, with a prize pool of $10 million. Lee achieved a new total stroke record (200) over three rounds in the 76-year history of the US Women’s Open, breaking the previous record by one stroke. With that score, Lee dominated the first position with a three-stroke lead over second-placed Harigae, while the next opponent Bronte Law was at -7.

The flag placement was more difficult, and the wind on the field was considerably stronger than in past days, making the final round of the U.S. The Women’s Open is tougher than ever. As a result, just two golfers hit negative and three golfers shot even par in this round.

The difficulty of the course, however, did not affect Minjee Lee’s leading position; the Australian golfer entered the final round with a total score of -13 and ended with the same score. Lee is one of just three players to shoot even par in this round, advancing to the championship by four strokes over American Mina Harigae.

Lee and Harigae were in the final group starting from the first hole in the fourth round. Lee wore a banana green shirt with the words “WAAC” – “win at all costs” – on the right chest and left shoulder.

Lee went -15 after two early birdies, leading Harigae by five strokes. Lee then dropped to -13 at halftime owing to two bogeys. However, the Australian golfer’s lead grew to four strokes as a result of Harigae’s bogey on the seventh hole. Lee kept par on hole 11 and unexpectedly extended the distance while Harigae finished bogey.

Lee birdied the next hole with a 2.7-meter putt, and Harigae kept par. She is currently -14, resulting in six strokes. Harigae made the first birdie of the round on hole 15. It moves her to -9, but the disadvantage remains since Lee also birdies. However, Lee “reversed” himself on the next three holes, shooting bogey-par-bogey and closing the total at -13.

Check out the Sport betting page

Harigae couldn’t keep up with this mark despite a three-par streak. She finished second at -9 and received $1,000,000 in prize money. Harigae had played in 47 major tournaments before the US Women’s Open 2022 and had never reached the top ten final. After more than a decade on the LPGA Tour, the 32-year-old golfer has yet to win the tournament. Harigae had to work hard two years ago to earn a spot as well as pay for the expense of the first-class American women’s golf venue. Harigae had only approximately $2,000 in her account in the summer of 2020, the year of the Covid-19 breakout. The LPGA Tour was closed at that time due to the epidemic. And Lee won the $1.8 million first-place prize at this year’s US Women’s Open. “The women’s golf movement in my country is booming. “I hope that this triumph will serve as a model and incentive for the rest of the globe in this sport,” Lee stated at the award ceremony.

Lee’s final-round par (- 71 strokes) set a new high in overall total (271) in US Women’s Open history. The previous record in this category was 272, with two owners, including 1996 champion Annika Sorenstam, also at the Pine Needles, and Inkster finished first with a -16 on Old Waverly par72 and also retains the championship point record.

The competition for second place was the main interest in the last round of the US Women’s Open 2022. For the first time in women’s golf history, the prize for 2nd spot was increased to $1.08 million. Before this tournament, Harigae’s largest reward was only $268,658.

Meanwhile, Hye Jin Choi is one of the two players that made the mark in this last round, but with bogeys on the 13th and 18th holes, the Korean golfer finished third with a -7. stick.

Jin Young Ko, the world’s number one golfer, finished fourth with a -6 stroke. Lydia Ko came in sixth place with a -5 stroke.

The US Women’s Open is one of five major tournaments (equivalent to Grand Slam tournaments in tennis) held on the LPGA Tour each year for female golfers (compared to male golfers, female athletes have more than one major).

The US Women’s Open will eventually be worth $12 million, courtesy of a long-term collaboration between the USGA and sponsor ProMedica, a 28-state non-profit general health care organization headquartered in Ohio. This is a very high amount for female golfers, and the winner of the US Women’s Open will become the golfer with the biggest prize money in the history of the women’s golf tournament system.

“This is a huge move that I believe will enhance this competition and create momentum to nurture young players’ dreams of playing golf,” Mike Whan remarked.

Meanwhile, the successor to the current U.S. Women’s Open CEO, Marcoux Samaan, mentioned: “Higher prize money has a stronger impact on the tournament. I’d like to thank Mike; I don’t think anyone supports the league more than he does. I believe he will be remembered as the greatest sponsor of women’s golf in history.”