Rome Masters: Wawrinka has a ticket to battle with Djokovic

Stefanos Tsitsipas and Grigor Dimitrov gave a thrilling 3-set chase in the second round of the Rome Masters men’s singles.

Meanwhile, Stan Wawrinka struggled to continue, and he will soon have to face Novak Djokovic in the next round.

Although it was quite difficult, the owner of 3 Grand Slam titles, Stan Wawrinka, still overcame Laslo Djere 7-6 (8), 3-6, 6-4 to win tickets to the third round of the Rome Masters this year. In this round, the Swiss player Si will again face another Serbian opponent, the No. 1 seed, Novak Djokovic. Meanwhile, 10th seed Jannik Sinner overcame fellow Italian Fabio Fognini 6-2, 3-6, 6-3 to go on to meet Filip Krajinovic.

Spaniard Paula Badosa had an impressive start in the second round of WTA Rome women’s singles when she defeated Russian opponent Aliaksandra Sasnovich. In round 3, Badosa will meet Daria Kasatkina.

Iga Swiatek – The player who has just climbed to No. 1 on the WTA Ranking had an impressive first match at WTA Rome this year when he smashed Elena-Gabriela Ruse 6-3, 6-0. In the next round, the Polish girl will face former world No. 1, 16th seed Victoria Azarenka.

In addition, the opening match of the 4th seed Stefanos Tsitsipas in the second round of the Rome Masters last night (May 11) was extremely difficult when he faced senior Grigor Dimitrov. Even the Greek “Morning Star” had to save 2 match points from the hands of “Little Federer” before defeating the Bulgarian opponent after 3 sets with a score of 6-3, 5-7, 7-6 (4).

Tsitsipas has now equaled a record of 28 wins this year to join 19-year-old Spaniard Carlos Alcaraz as the man with the most wins this season on the ATP Tour. In the third round of Rome Masters 2022, the 4th seed will face Karen Khachanov after the Russian player has just defeated the 15th seed of Spain, Pablo Carreno Busta, with a score table of 6-4, 2-6, 6-1. 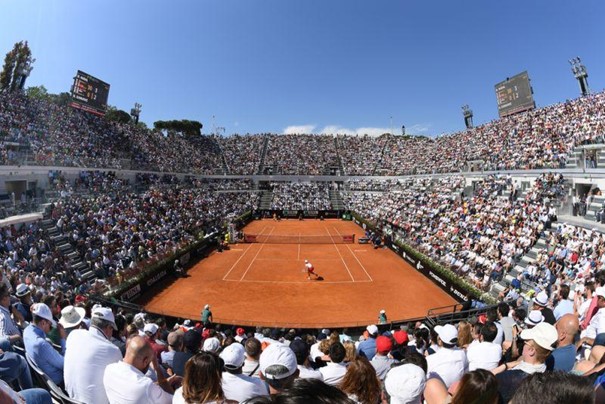 After overcoming Miomir Kecmanovic in the first round of this year’s Rome Masters men’s singles with a score of 6-2, 3-6, 7-6 (3), 12th seed Diego Schwartzman only had to face Marcos Giron. The player only got entered the main round thanks to the “Lucky Losers” slot (the player who lost in the qualifying round but still advanced by replacing someone else).

Thought this would be a pleasant challenge for Schwartzman, but the short guy who was only 1.7m tall was disappointed when he hung up the racket before the American opponent, who was ranked 60 in the world with a 1-6, 6-7 (4). Going into the third round of this year’s Rome Masters, Giron will meet Canadian eighth seed Felix Auger-Aliassime.

Poland’s 11th seed Hubert Hurkacz just excelled after two tie-breaks in the first round of the Rome Masters this year, but in the second round, David Goffin was underpowered when he faced Jenson Brooksby. Before his junior rival, born in 2000, Goffin lost 0-6 in the first set before losing the tie-break in set 2 with a score of 1-7, making the former ATP Finals 2017 runner-up soon stop.

The young tennis player who is ranked 38 in the world, Jenson Brooksby, enters the third round of this year’s Rome Masters to face the Norwegian 5th seed, Casper Ruud.

Tennis player Sebastian Baez made it difficult for second seed Alexander Zverev. In the match in the second round, Zverev had a hard time but knew how to neutralize Baez’s fighting style. In the end, Zverev overcame Baez with scores of 7-6 (6), 6-3 to enroll in the third round, where the German star will meet his Australian opponent – Alex de Minaur.

Some typical matches on Day 3

This is the first meeting between the two players, but Baez is unlikely to be overwhelmed by an opponent stronger and more experienced than him. This young player showed a quite impressive performance at Next Gen Finals 2021 and showed that even in high-pressure matches, he still plays quite elegantly and liberally. This could completely be a 3-set match if Zverev is not careful.

Zverev has had a good run at the Madrid Open, beating Stefanos Tsitsipas in the semi-finals and only losing in the final to Carlos Alcaraz. Zverev just needed to maintain effective service to have a high chance of winning against Baez, his heavy shots a weapon that could nullify Baez’s play or rely on groundstrokes.

Nadal has won 7 and lost 1 against Isner, but those numbers don’t reflect the fact that Nadal often has difficulty encountering the American opponent. Isner was one of the very few players who pulled Nadal into the fifth set at Roland Garros and even came close to winning a few times. Isner is seen as an opponent that always has the potential to shock the top players.

However, the problem is that Isner is not in good form this year. He even faced 8 breakpoints in the first-round match against Cerundolo. Nadal has won 10 times out of 12 finals at the Rome Masters, with only 1 loss before the quarterfinals. Isner, therefore can only drag 1 set into the tie-break at best.

Dimitrov must have been sick of hearing the name Tsitsipas. In just a month, the Bulgarian player lost to his opponent twice on clay, and both times were quite easy. Tsitsipas has even won another match against Dimitrov before on clay, so this is an ill-timed omen for Dimitrov when he is in good form.

Tsitsipas’ form is very jubilant, with only Alcaraz and Zverev defeating Tsitsipas in March. The Greek has won 27 matches this year, and on clay alone, he has a 17% higher win rate than Dimitrov. Wouldn’t be surprised if Tsitsipas scores a hat-trick later.

Here are the developments on day 3 of the Rome Masters. Hope you will have an objective and accurate assessment of the situation of this tournament. Stay tuned and follow us for the latest