South Korean golfer Kim Joo Hyung, 20, accomplished a unique achievement on the PGA Tour by winning the Wyndham Championship with a score of -20.

At Sedgefield Country Club in Greensboro, North Carolina, where the Wyndham Championship, a golf competition run by the PGA Tour, was founded in 1938, a miracle has just been wrought.

With a stunning victory there, Kim Joo Hyung stunned not only the American audience but also the golf fans throughout the world.

Due to the departure of several players for Saudi Arabia’s LIV Golf last month, Kim Joo Hyung was able to enter the Wyndham tournament with the help of a special temporary membership card from the PGA Tour.

Kim had an unbelievable first round at Wyndham: on the first hole of the first round, he made a quadruple bogey (on a par-4) (par4).

Despite this difficulty, Kim maintained her composure and made 7 birdies. He had a total of 67 strokes when the first round was through (-3).

Kim’s performance was even more spectacular on Sunday as he only managed 61 strokes, including 1 eagle and 8 birdies.

Since 1983, when the hole was originally counted, Kim Joo Hyung is the seventh player to hit such a low number of strokes on the final day of a PGA Tour competition. At the 2019 RBC Canadian Open, Rory McIlroy was the last man to hit 61 on Sunday.

Kim defeated Wyndham and won his first PGA Tour championship with a final score of -20 in his professional golf career. When he became the first golfer to hit a quadruple on the opening hole and go on to win, he performed a miracle.

With her triumph, Kim became the second-youngest golfer to ever win the competition on the US circuit since 1932 at the age of 20 years, 1 month, and 17 days. Jordan Spieth, who won the 2013 John Deere Classic, is younger than him.

Kim, who was born after 2000, also made history by being the first PGA Tour champion.

Korea had eight PGA Tour champion golfers before Kim. The first Korean winner without a membership card is a golfer from Seoul who was born in 2002.

Kim said after the tournament, “Thank you for making my dream of winning the PGA Tour come true. 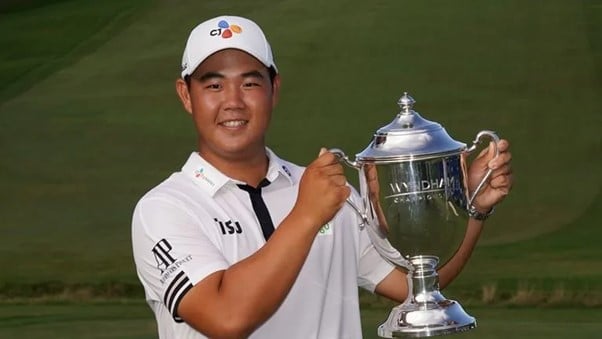 He continued, “The present is only the beginning. “In the future, I’ll show a better version of myself to everyone. This triumph would not have been possible without the Korean supporters. I’m flattered and appreciative of all the help I’ve gotten”.

He started competing in ADT, the Asian Tour’s second-tier competitive circuit, at the beginning of 2019. Kim is in a unique position to compete in the Asian Tour at the end of the season thanks to three triumphs in this setting.

After winning the Panasonic Open India on the Asian Tour in November 2019, his professional career had its first major change. In the history of this tournament, Kim became the second-youngest Asian Tour champion (17 years, 149 days).

After winning Singapore International, Kim won her second Asian Tour championship in the early months of 2022. The young Korean player earned 507,553 USD during the 2020–2021 season because of finishing second in the Singapore Open on January 23. Kim came in second at the SMBC Singapore Open a week later, also in Singapore (two compensating tournaments last season, interrupted due to Covid).

Kim was able to reconcile himself with the title of top golfer on the Asian Tour for the 2020–2021 season although he can’t win any other trophies (Asian Tour Order of Merit).

The Singapore Open, which has a 1.25 million USD prize pool, is the final Asian Tour tournament of the year. Four events are being announced for the 2022–2023 season calendar, the first of which is the Saudi International from February 3–6 with Saudi Arabia’s Public Investment Fund (PIF) serving as title sponsor.

PIF is a significant shareholder in Greg Norman’s illustrious LIV Golf Investments. LIV announced sponsorship of 200 million USD for 10 yearly prizes of the Asian Tour by the end of October 2021.

This is LIV’s first step in battling the two powerful men, the PGA Tour and the European Tour, who rule the professional golf industry (the new name is DP World Tour).

Dubai is home to DP World, a major provider of supply and logistics services. Beginning with the Race to Dubai sponsorship in 2009, the company entered into a partnership with the European Tour. In 2012, they served as the season finale’s headline sponsor. Since 2015, they have been an official partner.

Korean golfer Kim Joo Hyung received an invitation from the PGA Tour in July 2022 to sign on as a special temporary member for the balance of the 2021–2022 season. Kim can participate in the six remaining PGA Tour events this season with a sponsor waiver with the membership.

Kim will be able to gain points by participating in PGA Tour tournaments this year to secure a spot on the tour for the following year. Kim has played well in the last two Majors, the U.S. Open and The Open Championship, as the only Korean golfer to advance past the knockout in both competitions. Kim finished The Genesis Scottish Open, where she placed third in the singles competition, before The Open. He subsequently set a new benchmark by placing 39th in the OWGR world golf rankings after finishing 47th at The Open Championship with a final score of -5.

Kim will need to earn lots of FedEx Cup points to make the list of the top 125 golfers after the 2021–2022 season to qualify for the PGA Tour the next season.